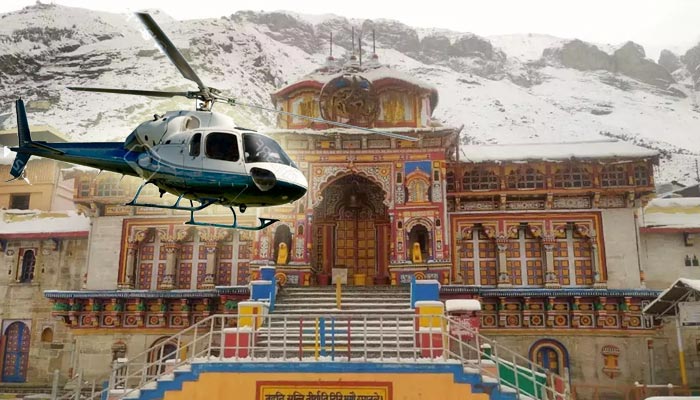 Get the best rates on this Char Dham Helicopter tour. This divine yatra starts Dehradun covering all Dhams of Uttarakhand: Yamunotri, Gangotri, Kedarnath and Badrinath and then again back to Dehradun.

Hanuman Chatti : The confluence of Hanuman Ganga & Yamuna River.
Yamunotri Temple : Maharani Gularia of Jaipur built the temple in the 19th Century. It was destroyed twice in the present century and rebuilt again.
Surya Kund : There are a Number of thermal springs in the vicinity of the temple, which flows into numerous pools. The most important of these is Surya Kund.
Divya Shila : A rock pillar, worshipped before entering the Yamunotri Temple.
Time taken to visit Yamunotri temple and back on pony 4-5 hours. After Yamunotri Darshan Dep Kharsali 2.30 PM
Arrival at Harsil helipad around 3.15 pm and drive by car to Gangotri. Time taken to travel by road from Harsil to Gangotri is 1 hrs.

Return back to Harsil hotel. Night halt at Harsil

Early morning departure from Harsil 7 am for Kedarnath Temple Darshan.

Arrival Kedarnath at 8am. On arrival visit the Kedarnath temple.

Kedarnath : is a majestic sight, standing in the middle of a wide plateau surrounded by lofty snow covered peaks. The present temple, built in the 8th century by Adi Shankaracharya, stands adjacent to the site of an earlier temple built by the Pandavas. The inner walls of the assembly hall are decorated with figures of various deities and scenes from mythology. Outside the temple door a large statue of the Nandi Bull stands as guard.

Tapt Kund : Natural thermal springs on the bank of the river Alaknanda, where it is customary to bathe before entering the Badrinath temple.
Narad Kund : A recess in the river, near Tapt Kund, forming a pool from where the Badrinath idol was recovered.
Mata Murty Temple : Devoted to the mother of Sri Badrinathji. Other important temples include Sesh Netra Temple, Urvashi Temple and Charanpaduka.
Mana Village : Inhabited by an Indo-Mongolian tribe, it is the last Indian village before Tibet.
Bhim Pul : On the other side of Mana village, a massive rock forming a natural bridge lies over the roaring Saraswati River. It presents a spectacular view of water thundering down through the narrow passage under the rock and is believed to have been placed there by Bhim, the second eldest among the five Pandava brothers.
Vyas Gufa (cave) : Near Mana Village, this is a rock-cave where Ved Vyas is believed to have composed the Mahabharata and the pauranic commentaries.